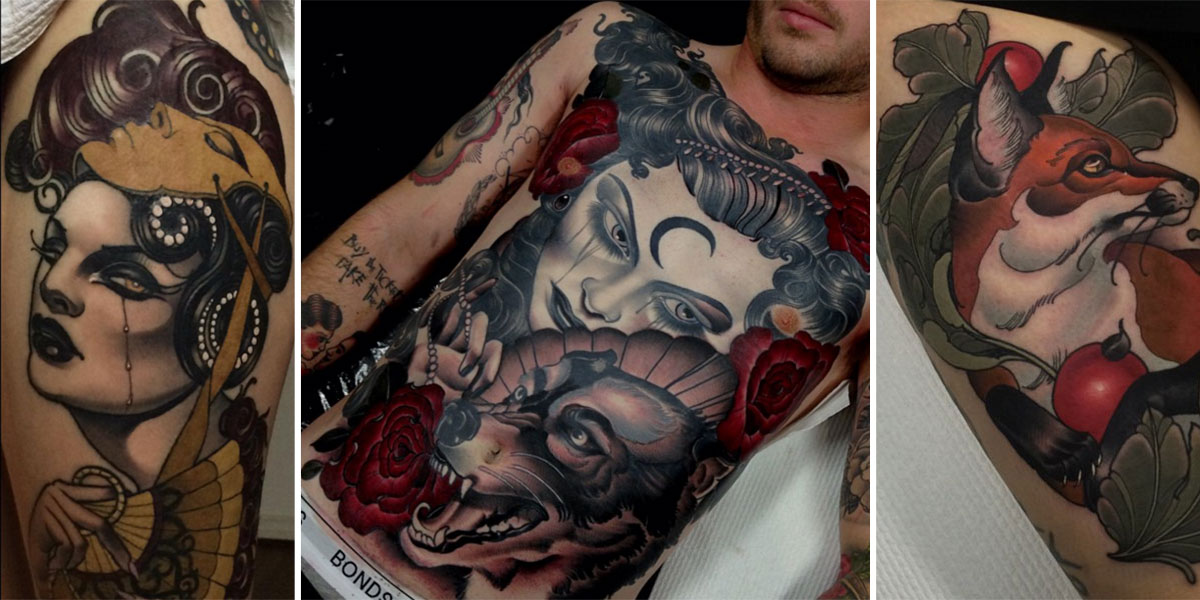 Working out of a private studio in Melbourne, Australia, Emily Rose Murray does tattoo work with a vintage tone, incorporating the sophistication and elegance of another era, yet translating it into an entirely original stylistic approach. Her calculated sense of composition is illustrated best by large-scale pieces, most notably sleeve and back work that curves with the body in a way that is both double-take worthy and perfectly natural. Emily’s work is linked by a subtly dramatic element, enhanced by the sweeping shadows, sharp angles, and soft glow that illuminates the focal point of each piece from somewhere far below its surface. All this, paired with a deep technical proficiency and obvious passion makes for tattoos that beg to be displayed yet do not fail to preserve the mystery that makes them personal to their receiver.

One thing that gives Emily’s pieces their cleanliness and thorough look is her ability to frame a design without obvious borders. When an image goes beyond symmetry, she places it so as to make it fitting to the body without restricting the movement of the artwork itself- the flap of the raven’s wing, the coil of the feather, the hair blowing in an imagined wind – every component maintains its mobility, almost surpassing the two-dimensional destiny of the tattoo.

A signature of Murray’s is to introduce an ornamental flourish, often in the form of a floral pattern or strings of pearls. Rarely are these additions merely a way to fill white space; they contribute to the overarching theme particular to each piece and only amplify the sensations it is meant to evoke. Some of the designs even hold a Japanese flair with their nature motifs and gentle symbolism, while others further push the roaring twenties vibe, in all its glamour and whirlwind desperation.

A fairly large portion of Emily’s portfolio showcases portraiture, sometimes within the realm of realism, other times focusing on mostly female characters of the artist’s design. Some of her realistic portraits, among them an impeccable rendition of Charles Darwin, are sepia-toned with a dark outline that highlights the nuances of the face and all that it is expressing.

On the other end of the spectrum are the female figures that Emily creates to channel the various messages her clients wish to embody. They’re noble, statuesque ladies, faces contoured, lips pursed, holding in their eyes an unspoken power. They are the spirits of flappers, of warriors, of strangely beautiful women who take care not to mention their real names. Their faces show up often in Emily’s tattoos, and no matter what compositional elements they are surrounded with, their gazes tie an entire piece together, assuming the inner fire of whoever’s skin they adorn. This recurring image is a sort of Emily’s trademark, but more so a reflection of the way she approaches a client’s idea on a personal level, putting her creative energy into pinpointing the right way to say what needs to be said through needle and ink.

Emily Rose Murray’s style is just as contemporary as it is old-fashioned, and most importantly, remains malleable. A look through her work is a look through the eyes of an individual who has perfected the art of telling strangers’ stories in a language of her own invention.