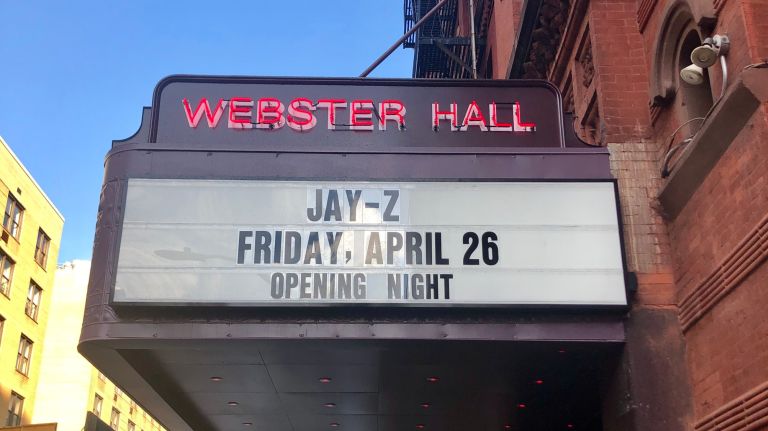 WEBSTER HALL: Concrete Jungle Where Dreams Are Made

“Over the great bridge, with the sunlight through the girders making a constant flicker upon the moving cars, with the city rising up across the river in white heaps and sugar lumps all built with a wish out of non-olfactory money. The city seen from the Queensboro Bridge is always the city seen for the first time, in its first wild promise of all the mystery and the beauty in the world.” – F Scott Fitzgerald, The Great Gatsby

Built in 1886 and host of many labor union rallies on the issues of better wages, reasonable hours, safe work conditions, health benefits — even birth control —  and child labor, Webster Hall in Manhattan became a gathering spot for American leftists, socialists, and anarchists. New Yorkers found Webster Hall as a place to organize against “the man” and against fascism as it was rising in Europe.

During the 20’s Socialist publications nicknamed Webster Hall the “Devils Playhouse,” where Prohibition did not restrict alcohol sales. Controversial that the time artists such as Marcel Duchamp, Man Ray, Joseph Stella, Langston Hughes and F. Scott Fitzgerald himself were known to attend Webster Hall events regularly.

As the Turn of the Century, Webster Hall saw Linkin Park, Sonic Youth, John Mayer, LCD Soundsystem, Lenny Kravitz and Green Day among many others perform. One thing became more and more evident, that if the venue was to survive with the soaring rents in New York City, and it’s limited capacity that it would need to be bought and run by someone who either did not care about losing money or wanted to do a complete renovation.

In an interview with amNY, Brett Yormark CEO of BSE Global said, “When we were thinking about who would be the right choice to open this legendary venue, we knew it had to be a world-famous New York City icon. No one fits that description better than Jay-Z, who will join an unparalleled list of celebrated performers who have played Webster Hall.”

Tonight is that night. Brooklyn born and raised in Marcy Houses, a housing project in Bedford-Stuyvesant who now has a reported net worth of over $900 Million will headline the first night of a renovated Webster Hall who launched the careers of many others who also achieved the American Dream.

“Yea, yea I’m out that Brooklyn, now I’m down in Tribeca
Right next to DeNiro, but I’ll be hood forever
I’m the new Sinatra, and, since I made it here
I can make it anywhere, yea, they love me everywhere I used to cop in Harlem,
All of my Dominicano’s right there up on Broadway,
Pull me back to that McDonald’s, took it to my stashbox, 560 State St.
Catch me in the kitchen like a Simmons wippin’ pastry’s
Cruisin’ down 8th St., off white Lexus
Drivin’ so slow, but BK is from Texas
Me, I’m out that Bed-Stuy, home of that boy Biggie
Now I live on Billboard and I brought my boys with me
Say whattup to Ty-Ty, still sippin’ Mai Tai’s
Sittin’ courtside, Knicks and Nets give me high five
Nigga I be Spike’d out, I could trip a referee
Tell by my attitude that I’m most definitely from”