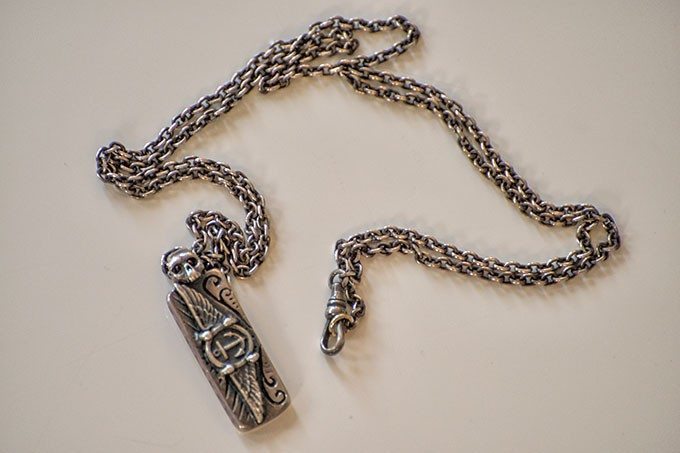 It’s hard to find cool jewelry especially for men, and sometimes it’s hard to know where to even look. I’m hoping Highlark can help in that department and today I have the remedy. Nick Potash is a jewelry designer from Cali and he makes some really cool pieces that men can rock. I came across Nick’s work few years ago because although jewelry wasn’t my thing really I wanted one nice piece to wear from time to time.

I can’t remember how I found Nick but I dug his style right away. Many of the elements he used were tattoo friendly symbols like the skull, anchor, wings etc., and he usually uses several of these symbols into one piece. I saw on his website this necklace which had the chain going through a skull, and the pendant part was an anchor with wings around it. I had to get my hands on it but I believe it was sold out on his web store. You probably have heard about New York Adorned (My favorite tattoo shop) on this site quite often, but what I haven’t mentioned yet is that they also have a jewelry store called Love Adorned. I learned that Love Adorned carried Nick’s pieces so I gave them a call and luckily they had the necklace I was looking for.

I went to the store and bought it the same day. Nick usually uses silver for his jewelry and does some cool engravings. The back side of my necklace has the words “Be Here Now”  and an hour glass carved out. I love that it’s meaningful but not too overly dramatic. You can tell from a lot of his pieces that he is influenced by the biker scene which is why his pieces are so rad. Nick takes commissioned work as well, and some people have even gotten him to make wedding rings.

There are a lot of cool pieces on his site for you to check out from skull rings to custom zippos. Nick’s handmade pieces are definitely going to get attention from your friends, and you can get a nice silver one or dig deeper in your pockets for some gold and diamond heirloom. He also co-owns a sunglass line called Crap Eyewear that you should definitely check out as well. I’m telling you if you’re in the market for badass jewelry, you’ll end up picking up a Nick Potash piece!