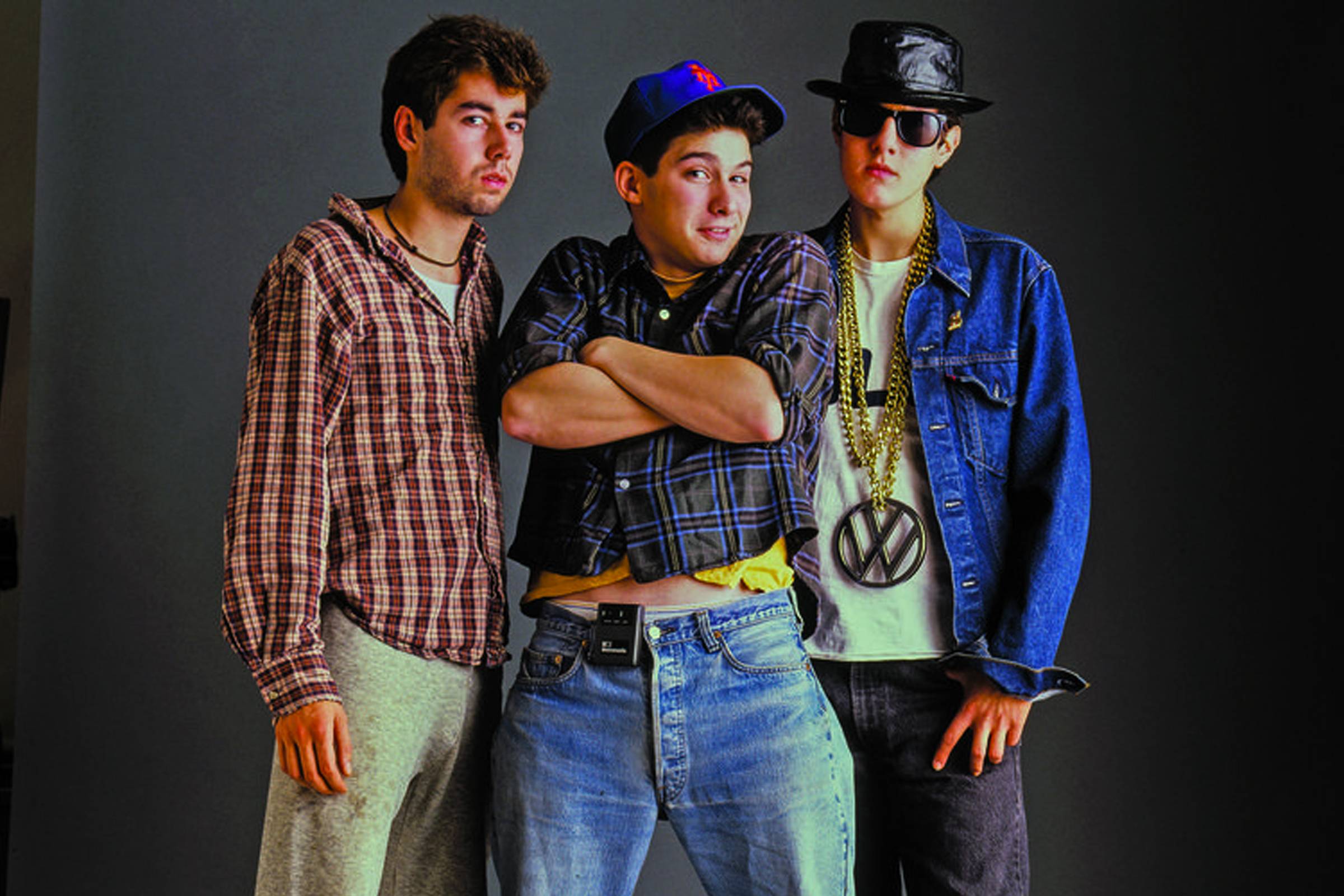 We first got wind of a potential Spike Jonze Beastie Boys film at SXSW 2019. Mike D told an SXSW audience, which included Highlark, “We are going to Mars with Elon…we wrote this book, that came out, so now coming up in April we have some shows coming up in Philadelphia and New York City. Spike Jonze is going to direct it, and that’s our big news.” The film, “Beastie Boys Story” was to premiere at SXSW 2020. Thanks to COVID-19, SXSW 2020 was canceled. Thanks to Apple TV, the world will be able to stream “Beastie Boys Story” this coming Friday. So far, Jonze’s “Beastie Boys Story” has received favorable reviews — mostly for being true to themselves and honoring MCA, Adam Yauch.

Here is what the critics are saying:

The Guardian’s Peter Bradshaw gives ‘Beastie Boys Story’ 4 stars and said, “The release of this documentary coincides with #MeAt20, a heart-twisting craze on social media for posting pictures of yourself at 20 years old. Middle-aged people’s timelines are speckled with funny, sweet and sometimes unbearably sad images of themselves in unlined, unformed youth, doing goofy things in milky analogue pictures from back when you had 12 or 24 exposures on your roll-film camera and getting them developed at Boots was a pricey business. That’s what I thought of while watching this engaging, oddly moving film from Spike Jonze.” Bradshaw went on to call the film “a time capsule of the 1980s: an era that was crass and excessive in so many ways, but now seems weirdly exotic. Full Review.

Variety’s Owen Gleiberman says “Beastie Boys Story,” which drops this Friday on Apple TV Plus, is the filmed record of that stage show. It was shot at the grandly refurbished Kings Theatre in Brooklyn (the interior of which now resembles a more baroque red-and-gold version of Radio City Music Hall), and though the show doesn’t feature any full-on musical numbers, in its cheeky smashed-beer-can and MTV-video-shot-in-my-rec-room way it feels like it could almost be a companion piece to “Springsteen on Broadway.” Gleiberman also says, “Beastie Boys Story” is less seamless, but more personal, than a classic documentary. Full Review.

Empire’s Alex Godfrey gives “Beastie Boys Story” 4 stars and rather beautifully says, “Ultimately the film is about time. What that does to us. How we contend with it. What we do with it. You feel for the band, but for your own life too, for your friends, your non-biological families — the families you choose. It’s about love and loss, growing, learning, maturing — and having a shitload of fun. That’s the film’s big magic trick. It’s about three white rappers from New York City. But — especially, maybe, if you came of age alongside them — you see yourself in it, reflected in it, inspired by it. And that’s priceless.” Full Review.

Indiewire’s Eric Kohn says in his review, “Spike Jonze Directs a Moving Nostalgia Trip as the Rappers Tell Their Story,” that the film “provides a charming and poignant explanation for how they pulled it off.” Kohn goes on to say, “The most enjoyable aspect of “Beastie Boys Story” is that Diamond and Horovitz know their story registers with such instant familiarity, and while they don’t reveal a lot of new information, they personalize the drama to an extent that gives it fresh currency.” Full Review.

Billboard’s Mara Reinstein calls the Spike Jonze documentary “a history lesson and raw live experience.” Reinstein goes on to say, “Of course, one could argue that the Beastie Boys aren’t the types to participate in a prototypical documentary, in which they’d recline in leather-upholstered armchairs and wax poetic about their mistakes. Their musical evolution aside, these guys have always been proud to be irreverent renegades. Horovitz and Diamond set this tone from the start in Story as they deliver self-deprecating jokes about the Boys’ formation: They were just teens when they met on the chaotic punk rock scene and subsequently decided to form a band with future Luscious Jackson member Kate Shellenbach.” Full Review.

Slant’s Steve Erikson gives ‘Beastie Boys Story’ 2.5 stars and says, “the film, then, often feels like a cross between a TED talk and a memorial service, but one gets the sense that Diamond and Horovitz are finally getting years’ worth of grief off their chests. The cumulative effect is, at the very least, touching.” Full Review.

Consequence of Sound’s Clint Worthington gives ‘Beastie Boys Story’ a “B+” and says, “to be sure, the concept of Spike Jonze directing a Beastie Boys documentary conjures up flashier results than this. But taking it for what it is, Beastie Boys Story remains an entertaining, insightful, and unexpectedly fun look back at three of hip-hop’s most iconic voices. It may not blow your ears off with the speaker-popping energy of “Sabotage” or “Intergalactic”, but it serves as a charming yet sobering reminder to treasure the verve and energy of youth, and to value the friends you spend it with.” Full Review.

Uproxx’s Mike Ryan calls ‘Beastie Boys Story’ “hilarious and sad and will please both diehard and casual fans.” Ryan also say, “I wasn’t a diehard Beastie Boys fan, but as I watched Beastie Boys Story, it really hit me how their music has been such a part of my life, even though I was rarely the one playing their music. In my own internal biopic in my head, a lot of important moments of my life would be scored to Beastie Boys music. So, yes, that whole “soundtrack to our lives” comment is pretty accurate, and Adam Horovitz and Michael Diamond make for a pretty hilarious, dynamic comedy team.” Full Review.

Slates’s Jack Hamilton calls ‘Beastie Boys Story’ “an enormously moving movie about growing up,” and “a celebration of youth, maturity, and MCA.” Hamilton also says,  “In typical Jonze fashion, the film is loose and anarchic yet deceptively well-controlled, its fourth wall always in varying states of permeability.The two men narrate their own careers, with a generous amount of archival footage of the band that goes back to its very beginnings. There are no talking heads weighing in on the band’s significance, no corny montages, and there is no Behind the Music­­–style canned drama. The result is a warm and intimate film, and one that I frequently found myself wishing I could experience in the IMAX format, which I can only imagine was intended to re-create the original live theatrical experience.” Full Review.

Pitchfork’s Jayson Greene says of ‘Beastie Boys Story,’  “the result amounts to a PowerPoint of the Beastie Boys story with running commentary. That’s it; no curveballs, no surprises. Essentially, it’s one long Lifetime Achievement Award that they hand out to themselves, and watching their youthful irreverence stiffening into middle-aged reverence is a bit sad.” Greene goes on to say, “The Beastie Boys used to be a sort of talisman for a trickster spirit; they played American pop culture like a kid beating Mario holding the controller upside down. As this chronicle takes great pains to remind us, however, that was a long time ago. The film is a big, uncomplicated love letter, and it gets a few faint smiles. But anyone looking for the group’s trademark virtues—spontaneity, smarts, offbeat charisma—should look elsewhere, because Beastie Boys Story has all the subversion of a bowl of soup.” Full Review.

The Wrap’s Steve Pond, says, “Like most rock docs, “The Beastie Boys Story” is mostly a film for fans, which is why it makes sense to film these stories in front of an audience of devotees rather than just in front of a documentarian’s camera. Diamond and Horowitz, now comfortably in their 50s, play to the crowd even as they manage to bring perspective to a career launched on the idea of being, as Diamond says, “a cartoon rap version of an ’80s metal band.” Full Review

The Playlist’s Jason Bailey gives  ‘Beastie Boys Story’ and “A-” and says of the film “it is, in essence, a two-hour curtain call, a celebration of not only their music but their friendship, and a chance for the duo to have the last word on their legacy.” Bailey says, “And frankly, [Jonze] doesn’t have to do much more than point his cameras at Horovitz and Diamond. They’re funny guys, loose, and wry and self-deprecating, which isn’t surprising (they were never a band that took themselves very seriously). What’s refreshing is how genuinely thoughtful, introspective, and, at times, apologetic they are about their journey. They reckon with their indiscretions and mistakes (well, most of them), particularly in that first flush of post-“Fight For Your Right” fame; “We morphed from making fun of party bros to actually becoming them,” they explain, and “Shit got really blurry.” Full Review.